A couple of years we had friends visiting and my sister suggested making quesadillas with a slow-cooked Asian pork. I admit it sounded just okay to me and I was a little skeptical. Shows you what I know, it turned out to be a hit. 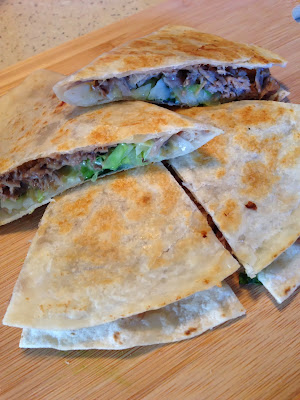 Rafute is Okinawan Shoyu Pork. It's traditionally made with shoyu (soy sauce), bonito broth, and maybe some sake or mirin, ginger, and brown sugar for flavoring. My sister uses a recipe found in the Star Advertiser newspaper as a guide. Included in that article is the quesadilla recipe from Russell Siu, owner and executive chef of my favorite Hawaii restaurant, 3660 on the Rise. Here is our version:

We start by trimming a 3-pound pork butt and cutting it into thirds. 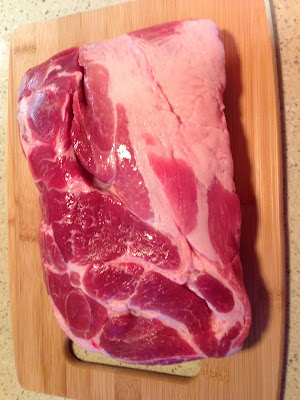 
Once the pork was cooked we removed it from the braising liquid and shredded it. The pork is so tender we barely needed to do anything, it was falling apart. Then we prepped the vegetables and assembled everything. Oddly enough it's the veggies that really make the difference in the final product.

Trim the pork butt of visible fat and cut into thirds.

To assemble quesadillas, layer pork, cabbage, cheese, and Chinese parsley on half a flour tortilla. Fold the tortilla in half. Grill on a lightly oiled griddle until golden brown and cheese is melted.