One of the most requested recipes from family and friends is for my homemade granola. Adapted from Melissa Clark's recipe, it's a staple in my home. It's part of one of my favorite breakfasts and it makes a great snack. I've given it as gifts and brought along bags when I travel. The best part is I know exactly what goes into it when I make it. 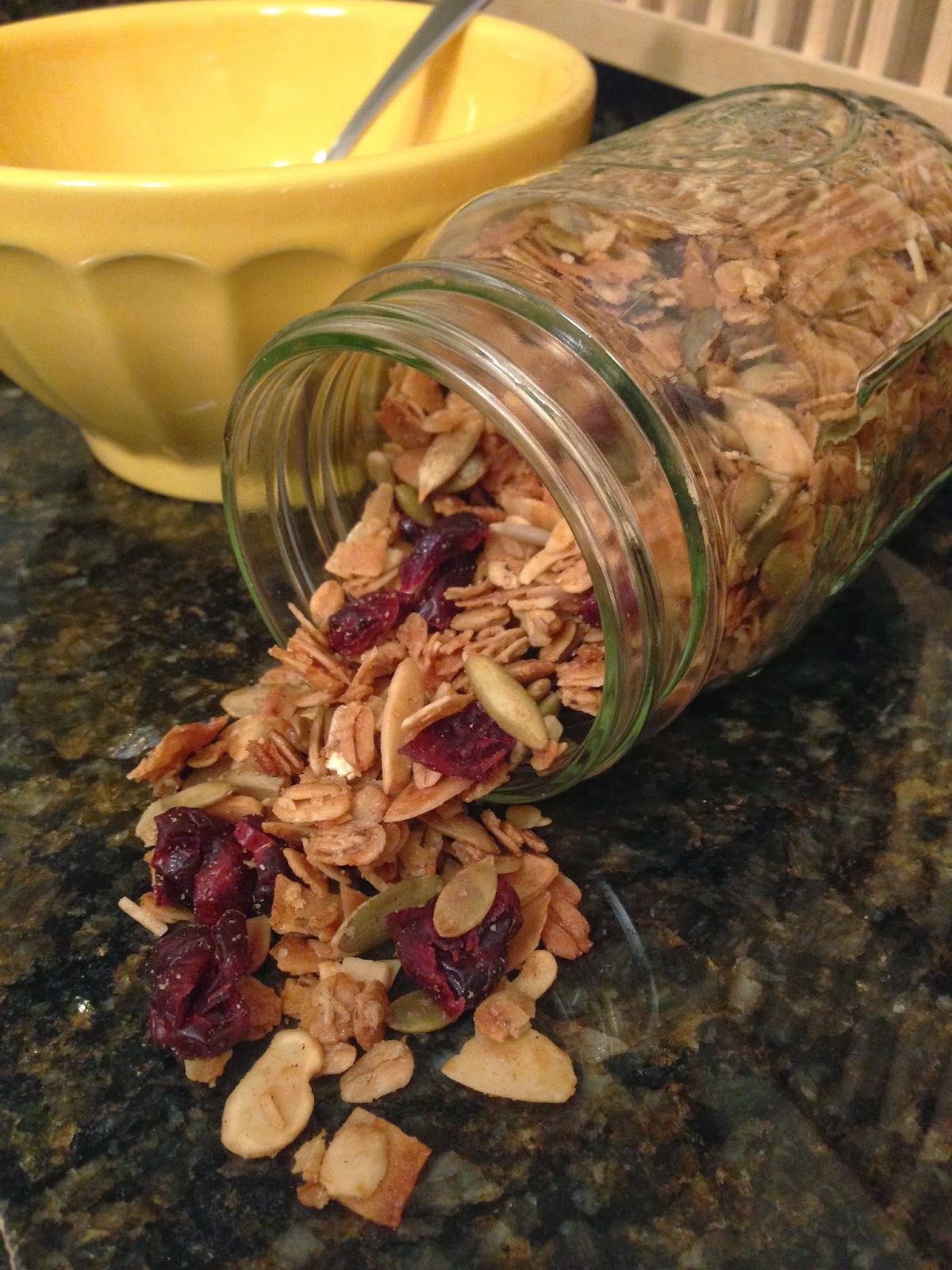 I wrote awhile ago about getting this recipe from friends who posted, "This is the best granola we've ever had..."  Having never made granola before, I was intrigued and tried it out. From the start I replaced two ingredients - the pistachios and dried apricots with sliced almonds and dried cranberries. It's just a preference for me.

There are two other aspects that make granola really special for me. One is a superstition, the other a necessity. Let's start with the superstition. I make a lot of Indian food and have quite a few spices in my pantry. The first time I made this I assumed I had ground cardamom but as it turned out I had only whole pods. So rather than going to the store for a single ingredient I pulled out my little mortar & pestle and started breaking open pods to grind my own spice. Freshly ground cardamom (and probably any other spice) smells AMAZING. I'm now convinced that the granola wouldn't taste nearly as good if I used pre-ground cardamom so I grind it freshly each time.

The other ingredient that makes this granola so special is the coconut. Everyone who's tried it agrees. Even friends who otherwise don't care for coconut can't believe they love it as much as they do. In the baking process the coconut is transformed into something truly delicious. The tricky thing is finding the right type. You can't by the grated coconut you normally find in the baking aisle. Some of my friends who originally tried this recipe resorted to buying fresh coconuts and making it themselves. Luckily I found just the right type at my local Whole Foods. I often buy 2-3 bags at a time because I'm so worried they won't restock it (I have yet to run into that problem and I hope I never do).

I'm posting a picture here so you know what to look for. I know this brand can be purchased online. Note the size of the coconut flakes in the little see-through window on the package - that's what you're looking for.


The other modifications I made to the original recipe were to reduce the amounts of olive oil and maple syrup. In the interest of reducing calories I started playing around with the amounts. The reductions didn't seem to alter the texture or taste of the granola.

And finally I bake the granola for an  hour instead of 45 minutes. I watch it carefully but in my oven (which runs fairly true) this produces the color and texture that I prefer - very crispy. Some may like it a little softer/chewier. I'd say play around with it until you find the right amount of doneness for you.

One of my favorite ways to enjoy the granola is to have it over plain, non-fat Greek yogurt for breakfast. Depending on the season I'll also add in fresh berries or melon. It also makes a nice afternoon snack. 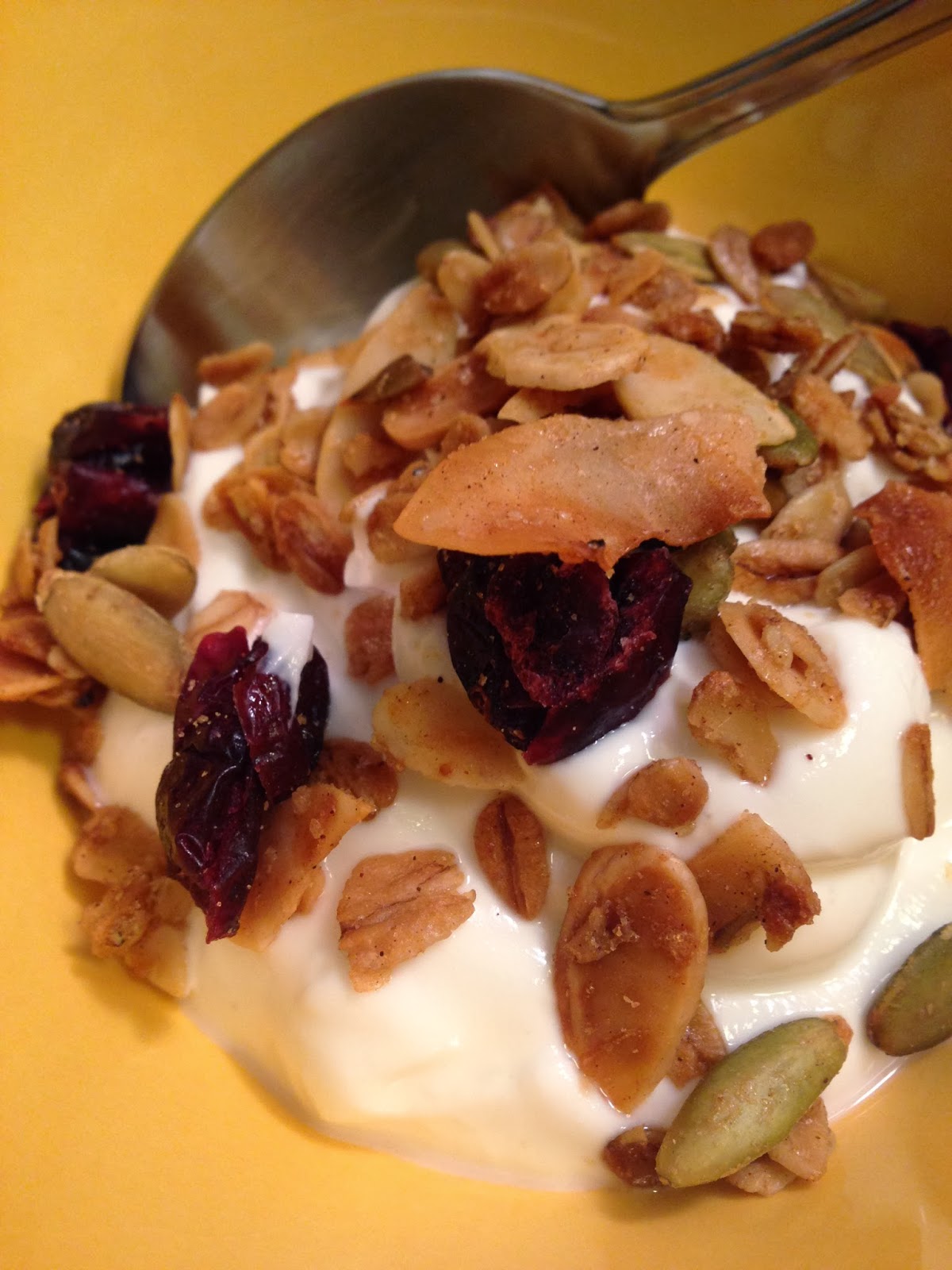 I'm so glad for Melissa Clark's recipe and grateful that my friends discovered it. It's one of the best things I make. I hope you love it too!

Spread mixture on a rimmed baking sheet in an even layer and bake for 45 minutes – 1 hour, stirring every 15 minutes, until golden brown and well toasted. (Note: I line the baking sheet with foil and spray it with cooking spray first)

Allow the granola to cool before transferring to a large bowl and adding cranberries. Toss to combine.

Serve with Greek yogurt and fruit, if desired.