A few months ago I took a fantastic class from Sur La Table on how to make croissants - a more intensive process than I imagined but that's probably true for most French pastries. One of the things we learned we could make with the basic croissant dough is a cinnamon sugar morning bun - very similar to a cinnamon roll but flakier and less like a bread dough. This weekend I decided to experiment, bypassing the more labor intensive portions. 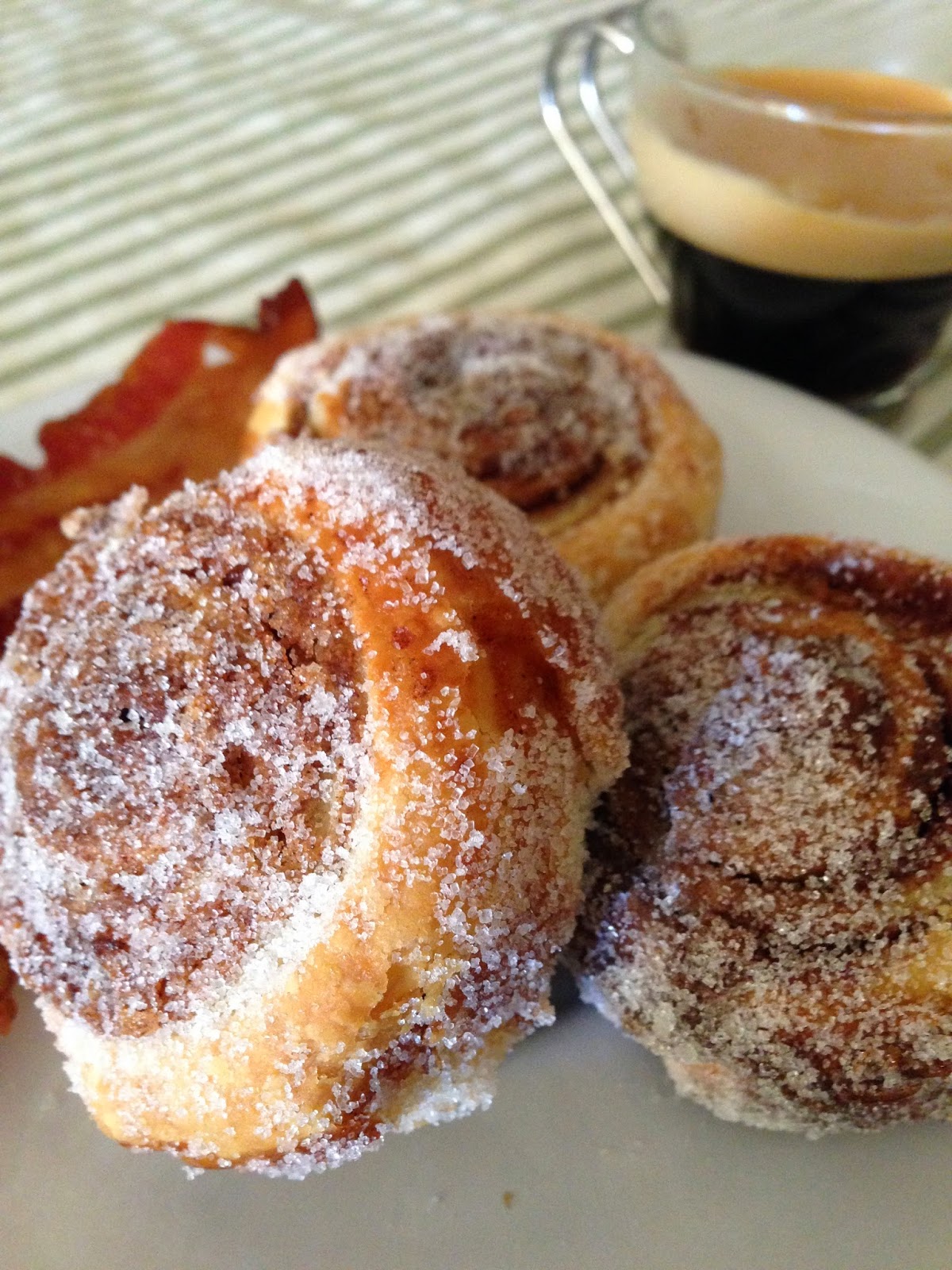 The shortcut I took was to purchase ready-made puff pastry, but not just any puff pastry. Recently I came across an all-butter puff pastry at Whole Foods. It was more expensive, obviously, and at the time I didn't realize that it was different from the frozen puff pastry I'd used in the past. However working with the dough and the results and taste I got using it made me look more closely at the packaging and that's when I discovered the difference. It hadn't occurred to me that puff pastry was anything but an all-butter recipe but for the mass market it probably cuts too deeply into the profit margin. I'm sure there are other companies that make an all-butter puff pastry but this is the one that I used: 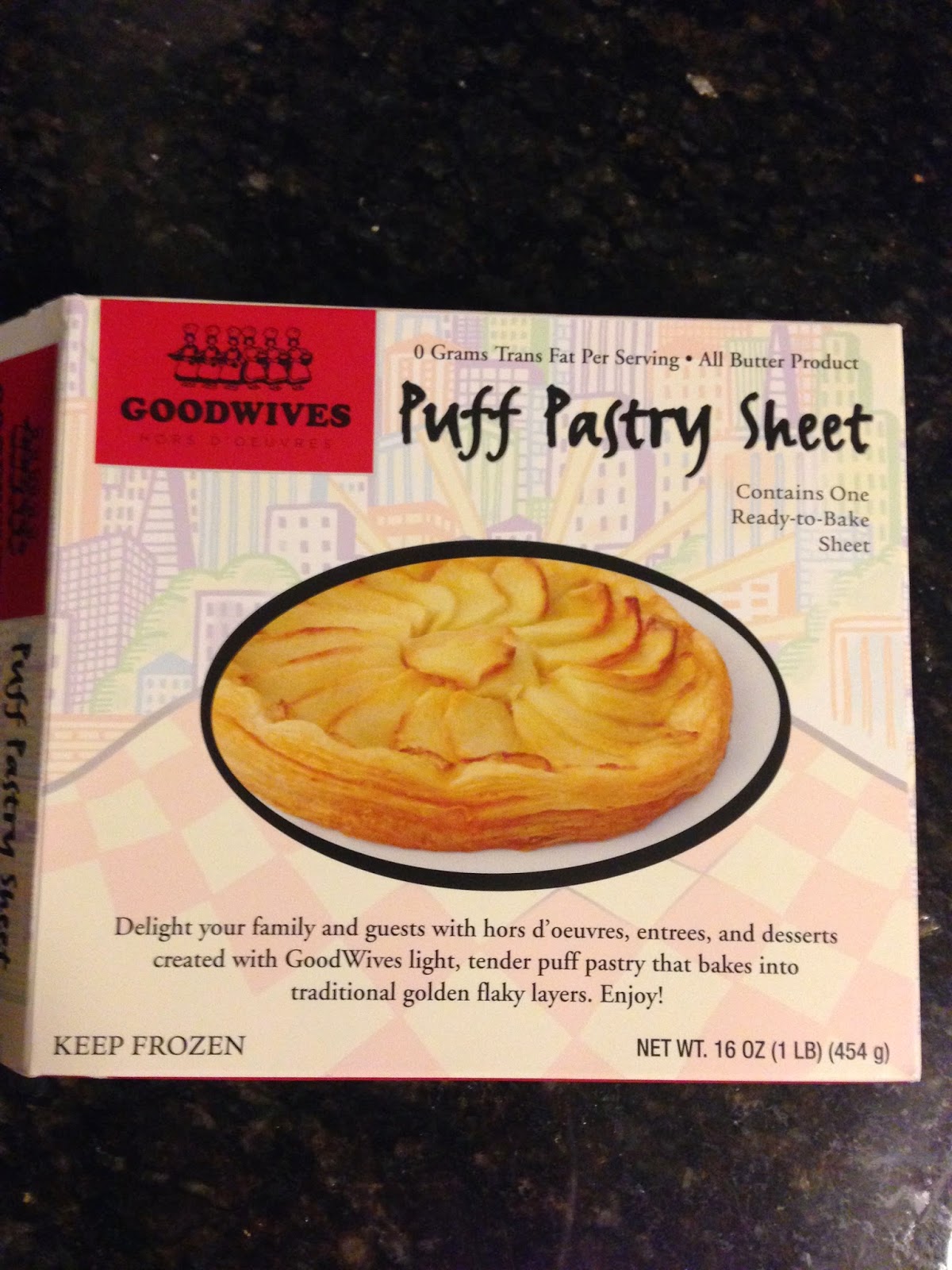 With the difficult part out of the way, the rest was pretty standard.


The main difference I found using this shortcut is the buns didn't rise in the same way our homemade ones did in class. These were flaky but more dense. But as a time-saver, these turned out quite well and made for a nice weekend breakfast.

Roll the puff pastry to an 18" long x 14" wide x ¼" thick rectangle, positioning the long end toward you. Brush any excess flour from the dough. Brush the entire surface of the dough with the egg, making sure to reach the edges.

In a bowl, mix together the brown sugar and cinnamon. Sprinkle evenly over the dough, making sure to reach the edges but leaving a 1" margin on the far side (long side) of the dough.

Starting with the long side closest to you, begin rolling the dough into a cylinder. When you reach the far end, pinch the dough to form a seam. The cylinder should be about 18" long. If it isn't, roll it gently back and forth until it lengthens. Cut the cylinder into 12 equal pieces, each about 1½" wide.

Generously butter a muffin tin and place each piece, cut side up, into a muffin cup. Cover loosely with plastic wrap and let rise in a cool, room-temperature area until the buns have doubled in size (about 45-60 minutes). Do not try to rush the rising by placing in a warm oven. This will melt the butter in the dough.

Note: these buns never doubled in size. I let them rise for 60 minutes and they rose slightly but never like the ones we made in class

Preheat the oven to 375-400 degrees, positioning a rack in the center of the oven. Chill the buns in the freezer for 10 minutes or the refrigerator for 15 minutes to firm the butter (to create a flakier texture). Bake for 25 minutes, until the buns are golden brown.

Place the granulated sugar in a bowl. Once out of the oven, gently remove the buns from the muffin tin using a tongs rolling each one in the sugar before placing on a silicone mat or parchment paper to cool.

Note: if the buns are cooling too quickly and you're having difficulty removing them from the tin, place in the oven for a minute or so and the residual heat will warm them enough to loosen the sugar.