Updated September 2021
One of the staples of the late summer, early fall farm share is a plethora of peppers - bell peppers, sweet peppers, and hot peppers. Last year the majority of the bell peppers were green, my least favorite of the bells. This year the primary color was yellow but we had a fair share of reds, greens, purples, and whites too. 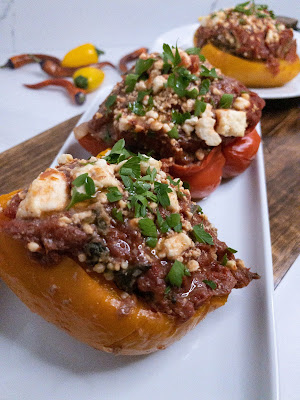 Last year I made a Stuffed Bell Pepper recipe from Cook's Illustrated's The Best Light Recipe. It's a lightened version of a traditional stuffed pepper using ground turkey - delicious. This year I used Eat Your Books (read my earlier post) to find alternatives and to see if there was anything more tempting. That's how I discovered Ellie Krieger's Greek-Style Stuffed Peppers in her book The Food You Crave. It's my new favorite. 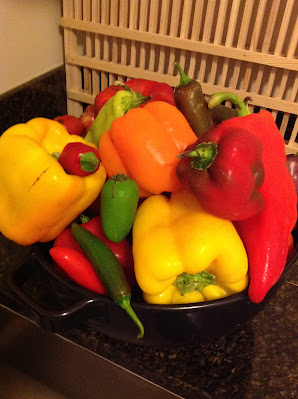 The filling is a mixture of lean ground beef (I have also used a mixture of ground beef and ground turkey), bulgur, grated zucchini, onions, frozen chopped spinach, eggs, and just a little oregano, salt, and pepper for seasoning. I also use some cayenne pepper because I like the heat.
Feel free to add other leftover vegetables that you may have on hand to the filling. If you are adding raw vegetables you want to make sure they will cook evenly with the other filling ingredients. Otherwise use cooked vegetables like roasted eggplant or squash.

Two really great things about this recipe: 1) the peppers just need to be cleaned and halved, that's it, no parboiling or any other prep and 2) the filling doesn't have to be pre-cooked. Compared to other stuffed pepper recipes this one is so easy.


The first time I made this I wasn't sure how it would turn out. I was worried that the peppers would be dry and the filling wouldn't be cooked through. I think so much liquid comes out of the zucchini and the tomatoes it keeps everything moist and since the peppers are halved they can cook all the way through.

And just because I don't like to waste anything, I took the peppers tops and roasted them along with a few more end-of-season tomatoes.

** You may also use your favorite jarred marinara sauce but be careful of added salt and sugar.