P is for Padma, a mini tribute

Last year I lost one of my best friends. Padma was not only a friend but a confidant and a cheerleader for me. If asked, I bet she'd have greater belief and hope in me than I ever would in myself. She was taken too soon from us and there's not a day that goes by that those who knew her don't miss her dearly.

For me, so many memories of her are connected to food. Whether it was her often requested meal when she came to visit - cornflake chicken and garlic mashed potatoes - or cooking Indian food with her mother while she videotaped it, to long nights sitting around the table with friends just talking, food was always present. Now that she's gone I find little things in the day that remind me of her, often unexpectedly. Although they aren't all connected to food, not surprisingly, many of them are.

It was just this kind of connection that I experienced last weekend while out grocery shopping and saw a flat of Italian plums. For years Padma had asked me if I'd ever had prune jam, something she'd discovered when traveling in Europe. She loved it, wanted more, but could never find it. Being American I had an instant, "eww" reaction to the name. The thought of taking what we know as prunes and turning it into jam just didn't hold any appeal. Had a gone back to my high school French I would have remembered that "prune" doesn't have the same connotations outside of American English and generically, in fact, was the fresh fruit we know as plums. More recently I learned that what we call Italian plums are of the variety turned into prunes (now being marketed in the U.S. as "dried plums").

I bought the flat of plums without having a specific recipe in mind. But once I got home I turned to my favorite canning blog, Food in Jars, and found her recipe for Italian Plum Jam with Star Anise. Food in Jars is my go-to blog and cookbook when it comes to preserving. After I made my first batch of jam, inspired by an article I read in Food & Wine magazine, a friend sent me a recipe and a link and I was hooked ever since. The author, Marisa McClellan, makes the whole process accessible and fun. But I digress...

Italian plums are more oblong in shape than the regular varieties you find in the supermarket. The skins are dark with a dusky-white powdery residue that must be washed off. In this batch, and this is my first experience with them, I found the skins to be thinner and less tart than the varieties I'm used to. The flavor of the flesh is mild and not overly sweet. 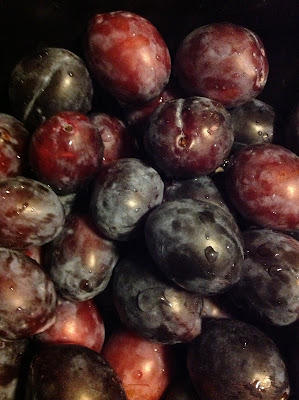 I washed and prepped the plums, setting them aside to steep with the sugar and spices. I doubled the recipe but halved the amount of star anise, replacing the other half with cinnamon sticks. I don't care for strong licorice taste so I was a little leery of using the full amount of star anise. 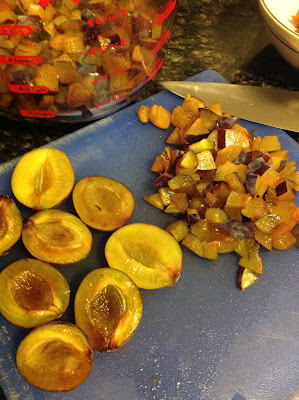 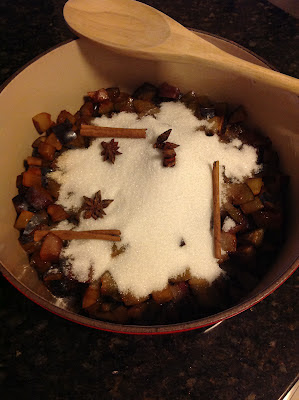 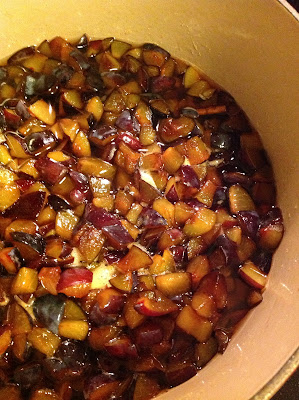 Being new to jam making I'm still not quite sure when the jam is ready. I used the plate test as recommended but even after it seemed to pass, I let it cook a little longer just to be sure. So instead of four half-pints I got three but I'm happy with the results. As I hoped, the star anise flavor wasn't too strong and balanced nicely with the plums and cinnamon.

I never got to taste the prune jam that Padma loved so much so I have no idea if this recipe is even close to what she had. And more than anything I wish she were here so she could share it with me and we could find a way to recreate that experience for her. But even though she's not here, I'm still creating memories with her and hope she's enjoying them too. I love you P and I miss you. This one is definitely for you <3. 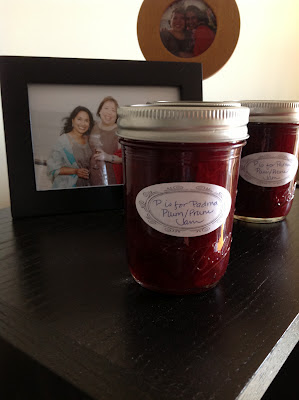 Familien Christensen said…
That is beautiful! Surprisingly, after I gave birth to Danika my mom bought me a flat of plums and I devoured them! She had to buy many more! To this day I still love them and it reminds me of that time in my life when it quenched my thirst for a juicy fruit while I was recovering from my c-section and struggling through the perils of breastfeeding!
07 October, 2012 17:43