Last of the CSA veggies

The last day of our CSA was sad but at this time of the year by the time I get to the pick-up location, it's dark and we're selecting veggies by flashlight phone apps. I'm not worried that I'm going to get old or rotten veggies but it is a bit of a surprise when I'm finally in my kitchen and able to inspect our haul for the week.

As I do each Thursday when new veggies come in, I inspect the fridge for anything I've let go too long that I just couldn't get to. This is the sad part of the CSA - veggies that go bad. I hate wasting food so when it happens it's just awful. But on that cool October night I decided to make what I called All in the Pot soup - basically use whatever makes sense and cook it up. Loosely based on a recipe for Farmers' Root Vegetable Soup from the New England Soup Factory Cookbook, the soup roughly consisted of:
The beauty of this recipe is it doesn't require anything more than putting all the veggies into a pot with enough chicken broth (and water if necessary) to cover. Bring everything to a boil and simmer for 45-50 minutes, until the veggies are tender. I removed the thyme stems, puréed everything in batches, put it back in the pot and adjusted for seasoning. Perfect for a cool autumn night. And except for one sweet potato, the chicken broth and salt and pepper, everything else came from the CSA. 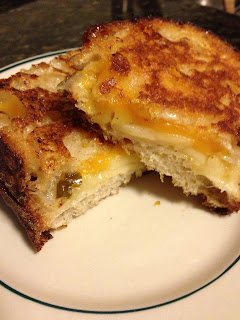 A couple of days later I watched an episode of Symon's Suppers where Michael Symon prepare a one pot meal of Chicken Thighs with Kale. It was a straight forward and delicious looking dish and the nice thing was, I had all the ingredients I needed except for the chicken. Yes, I even had Marcona almonds in the freezer. The best thing was I could use the two large bunches of CSA kale that I had in my fridge.

I love the recipe and highly recommend it but I would up the "pinch of paprika" to maybe 1/2 - 1 teaspoon. I think it really added to the dish. One other observation is, red jalapeñoes are NOT the same as Fresno chiles. I knew this but it's what I had on hand (thanks to the CSA). I could take the heat but I know many of my friends would not have been able to eat that dish.

All that I have left of CSA 2012 are a number of beets waiting to be roasted, a head of romaine, some carrots (for carrot soup, of course), half a head of an enormous cabbage, and a couple of apples. Not too bad. I'm looking forward to next year.