It's that time of the year - weekly CSA pickups of fresh veggies, a fair share that I don't cook on a regular basis. What I was left with after the first two weeks were turnips, kohlrabi, and braising greens (a mixture of mustard greens, bok choy, turnip and kohlrabi tops).

I did a search and found a couple of recipes that I combined to create a scalloped turnips, kohlrabi, and greens gratin. The Scalloped Potatoes & Greens recipe came from our CSA, Silverbrook Farm. It never occurred to me to include greens in a gratin dish but it seemed like a good way to use up the random bunch of braising greens I had. I have very little experience with kohlrabi so I decided to treat it like any other root vegetable and replaced the potatoes with both the kohlrabi and turnips.

The second recipe that inspired me came from a blog called What's For Lunch Honey which featured a recipe for Kohlrabi Turnip Gratin - perfect, just what I was looking for.

The nice thing was I could use up some other things in my fridge - a bit of pancetta, a couple of giant scallions (also from the CSA), some heavy cream left over from a dessert I made for our 4th of July cookout.

I started by cleaning, peeling, and thinly slicing the kohlrabi and the turnips. I also washed the greens in several big bowlfuls of water - CSA greens seem to be particularly dirty and need a lot of cleaning. Once clean I cut them up into a chiffonade.

In a big skillet I fried some of the pancetta - no more that a couple of ounces - and added in two very large scallions, chopped. Once the pancetta was browned and a little crisp and the scallions were softened I added a couple of tablespoons of butter to start the roux. 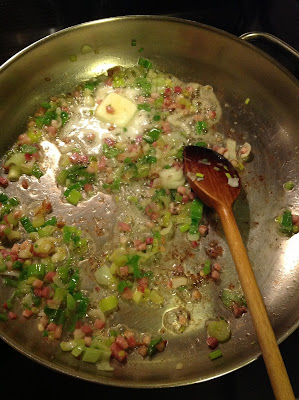 I added a few tablespoons of flour to create the roux and let that cook for a bit to get the raw flour taste out. I added about a cup of heavy cream and another cup of non-fat milk (such is the dichotomy of my refrigerator). I brought the liquids to a boil then added the kohlrabi and turnips and let them cook for 5 minutes. Then I added the greens and cooked them just until they were lightly wilted. 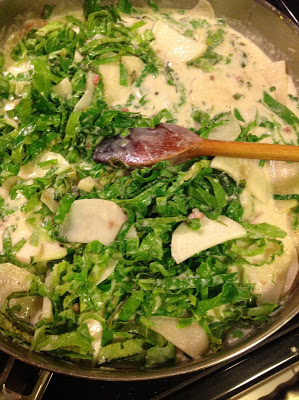 I poured the mixture into a casserole dish that I had coated with cooking spray. I put a thin layer of grated Parmesan cheese on the top then placed it on a tray to catch the drips and covered it with foil. I baked it at 350 degrees for 45 minutes then removed the foil and continued to bake it for another 15 minutes - just to get the top golden brown. 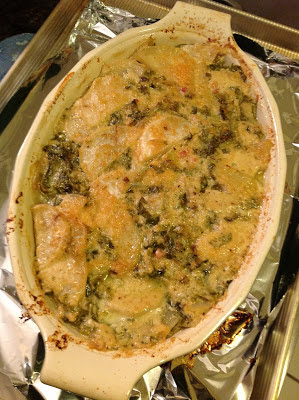 I toasted some sourdough bread and it made for a nice dinner. I didn't need much, it was quite rich. If I had the energy I think a simple salad would have gone well with it.

I'm not sure if it's the nature of kohlrabi or just the ones I had but I found them to be very fibrous. They were cooked through but not too pleasant to eat. I ended up pulling out most of the pieces from my serving and will probably do it for the rest of the dish as I eat it for leftovers in the coming days.

I may have to do more research on kohlrabi if we get more in our CSA share. But it's what I enjoy doing - learning new dishes, trying new ingredients, creating my own culinary mash ups.