For Moveable Feast last weekend I made a second dish - Bobó de Camarão or Shrimp Bobo - a delicious stew with vegetables, shrimp, and coconut milk, thickened with manioc (also known as yucca or cassava). When we were choosing our dishes I think a number of us thought Brazilian food meant lots of meats so we decided to go a different route. As it turns out we hardly had any meat dishes at all.


First of all I need to say that this recipe says it feeds 8. I think that may be true if they were, perhaps, eight American football players. I bought ingredients to make the full recipe but thankfully I decided to cut it in half. It filled my 7.25-qt Le Creuset pot and I had a lot of leftovers.

The recipe starts with the preparation of the manioc which needed to be peeled, boiled, and mashed. I've never used manioc before. Although the skin is rough and covered in wax (I'm guessing to help keep it from breaking down during transit and storage), it's pretty easy to peel. 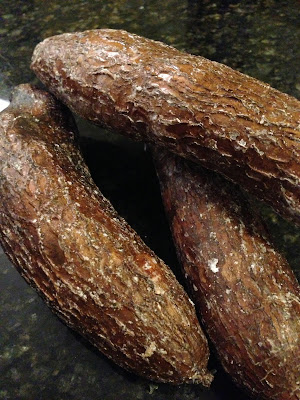 I did a little research and found that you really just need to cover the manioc with lightly salted water and, as one site so eloquently put it, cook the sh*t out of it. I cooked it for about 40 minutes until they looked like they were falling apart. 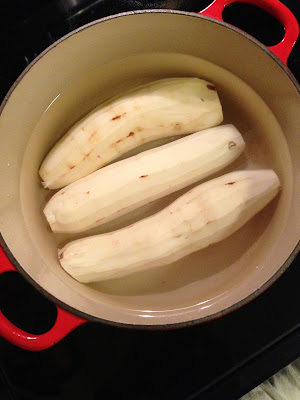 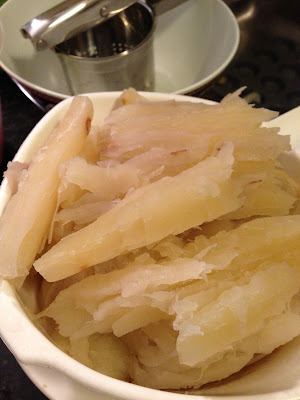 I also read that manioc had a tendency to get gluey when mashed so I drained them well then put the manioc through a potato ricer. There's a very fibrous strand that runs through the middle of the manioc root. It's easy to remove and discard. 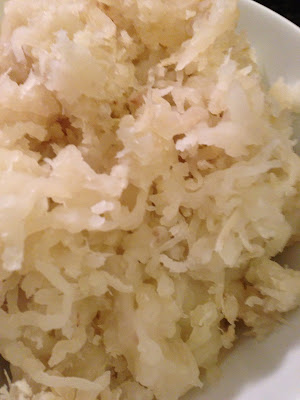 I thought the riced manioc was tasty on its own. I need to look up the nutritional value but I think it's a good substitute for mashed potatoes. I didn't think it required any additional butter, cream, or milk.

Once the manioc was ready I made the first part of the dish - the manioc cream. I should warn you that this recipe, while containing a lot of vegetables, is far from calorie conscious. It contains copious amounts of olive oil and coconut milk. I would make this more often except I now know what goes into it and I couldn't...

Putting this dish together was different from what I'm used to. You essentially take everything - vegetables, olive oil, coconut milk, and mashed manioc - and put it into the pot and start cooking it. No sauteing of the vegetables first like I'm used to in more traditional European preparations.

The directions say to cook it "until the cream begins to pull away from the bottom of the pan" - I can't say that it ever got to that stage. I cooked it until the vegetables were relatively tender. Once the manioc "cream" is finished you set it aside to start the next part of the dish.

The next part of the dish starts in much the same way, tipping a bunch of chopped vegetables into the pot along with more olive oil, garlic, and shrimp.Once heated through you add more coconut milk and then add the reserved manioc cream.

According to the recipe, and all other variations of the recipe I found, the key to any bobó dish is the dendê or red palm oil. In hindsight, since none of us truly knows what real Brazilian food tastes like, I probably didn't need to purchase the bottle of dendê oil. I'm not sure how I'm going to use the rest of it.

Whether the dendê made the dish or not, it was delicious. I would make it again but would have to severely cut back on the amount of olive oil and switch to light coconut milk.

So that's another delicious feast in the books. The next theme is yet to be named but I'm looking forward to it! Here are some, not all, of the other dishes we ate: