I recently visited friends in Geneva and learned a piece of Genevois history as told through chocolate and marzipan. The Swiss are known for their chocolate and one of the first places we stopped on our walk through Geneva was a chocolatier. My friend pointed out les marmites - soup pots or cauldrons formed in chocolate - and told me we would be seeing these everywhere as the city prepared for la Fête de l'Escalade. 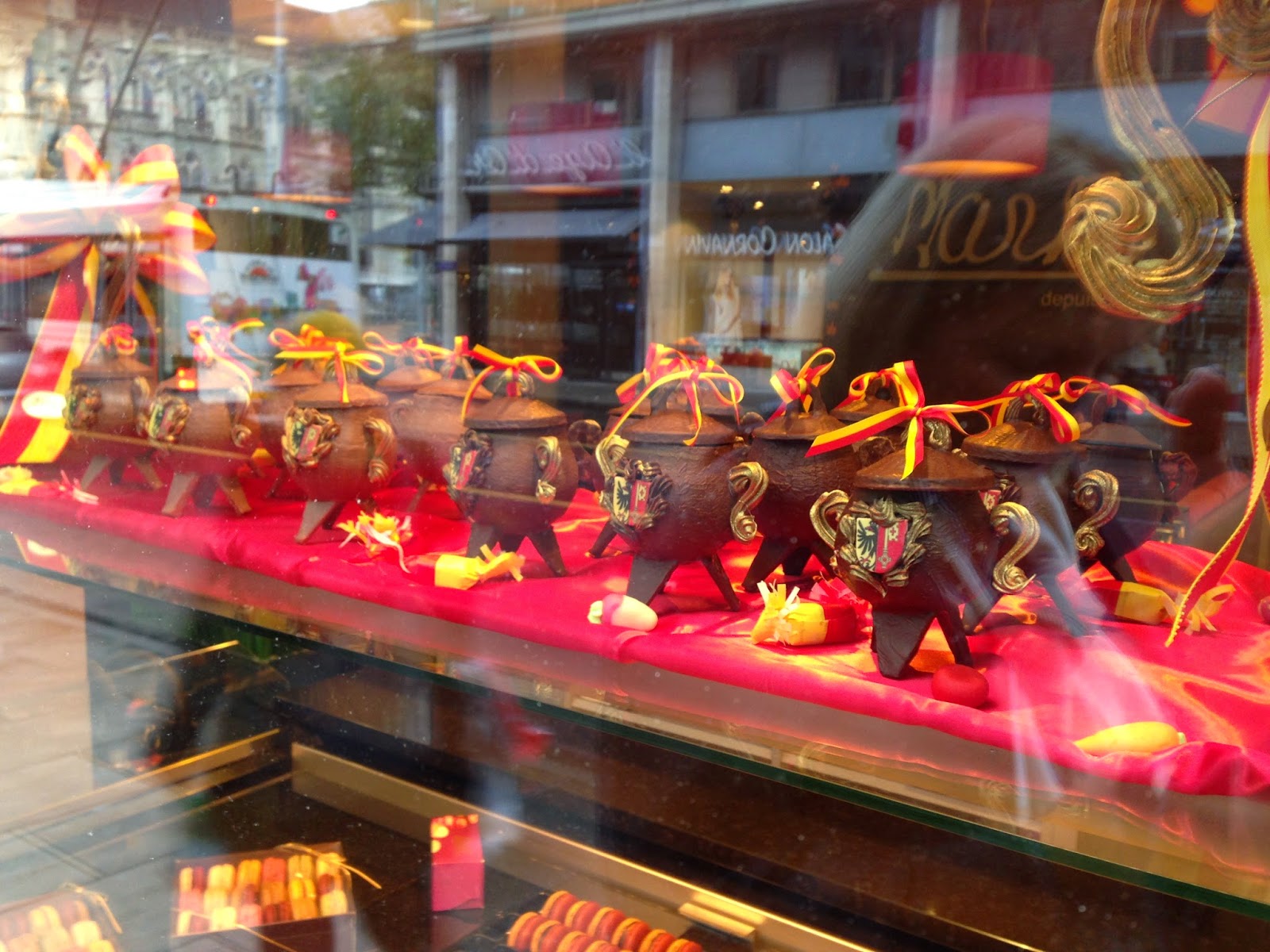 As the story goes, in 1602 the Duke of Savoy launched an attack on Geneva. His men began to scale the walls (in French this is called l'escalade) and were thwarted by Mère Royaume, a mother who lived just above the gates. She took a cauldron of hot soup and poured it on the attackers. The cauldron fell on the head of one of the attackers and killed him. The subsequent noise alerted the citizens who came to the defense of the city.*

To celebrate the victory, shops around Geneva sell these marmites. You can find them mass produced and sold in markets but the chocolatiers have the more elaborate ones, some quite large. You can watch the labor intensive process to hand make these marmites here (you may want to silence the music). 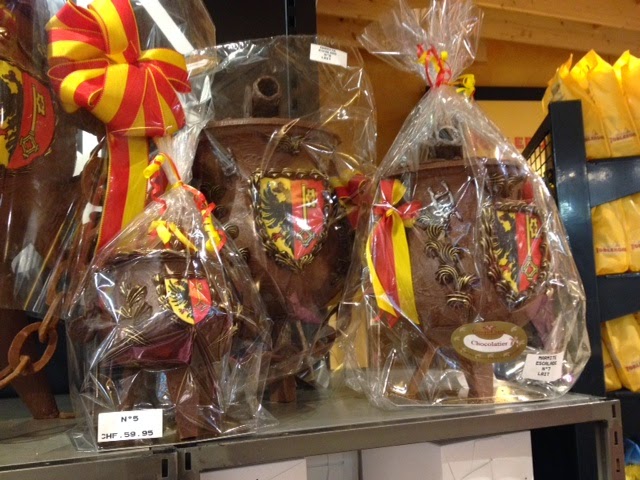 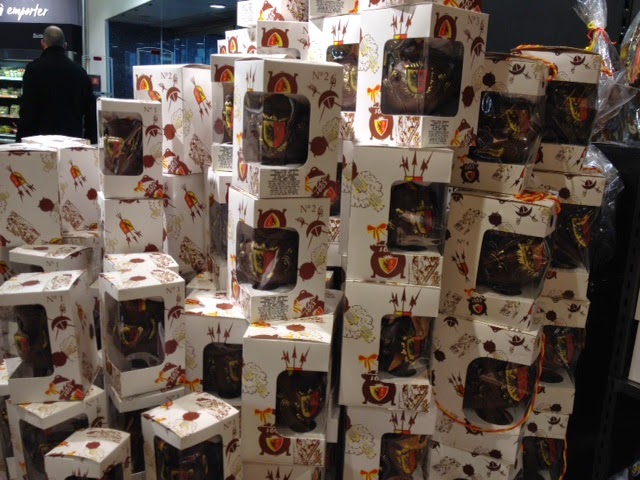 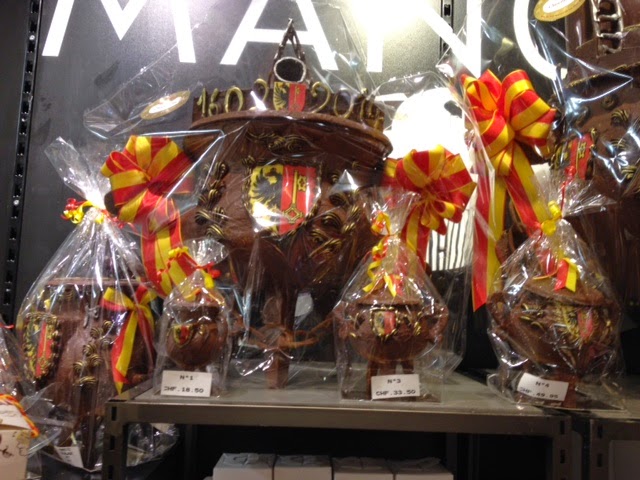 Each marmite proudly displays the Genevan coat of arms and are festooned with red and yellow ribbons. Inside each pot are marzipan vegetables and candies wrapped in the red and gold of Geneva. These wrapped candies are like mini versions of British crackers so I had to remove the little explosive popper in order to bring the marmite home with me. 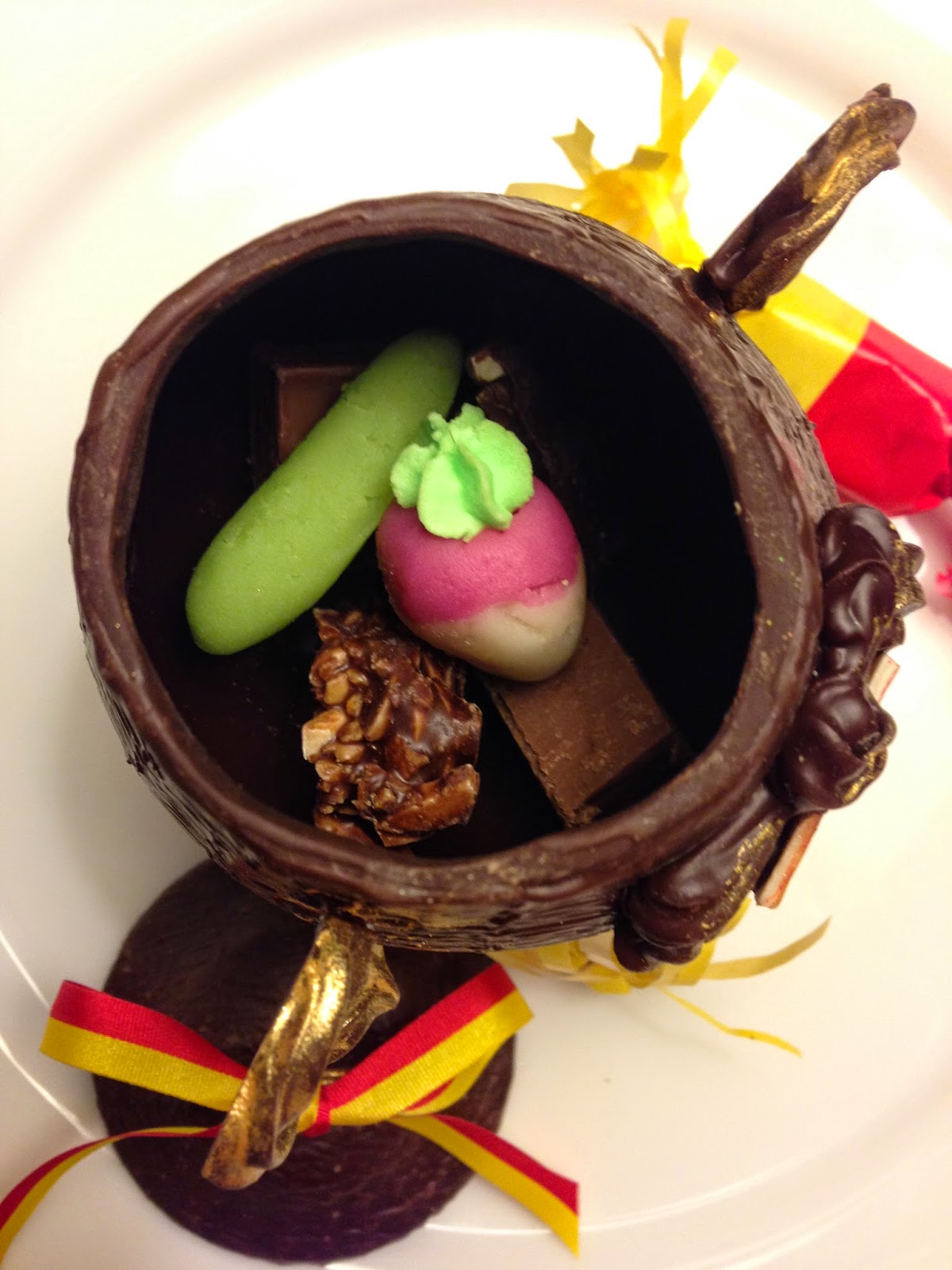 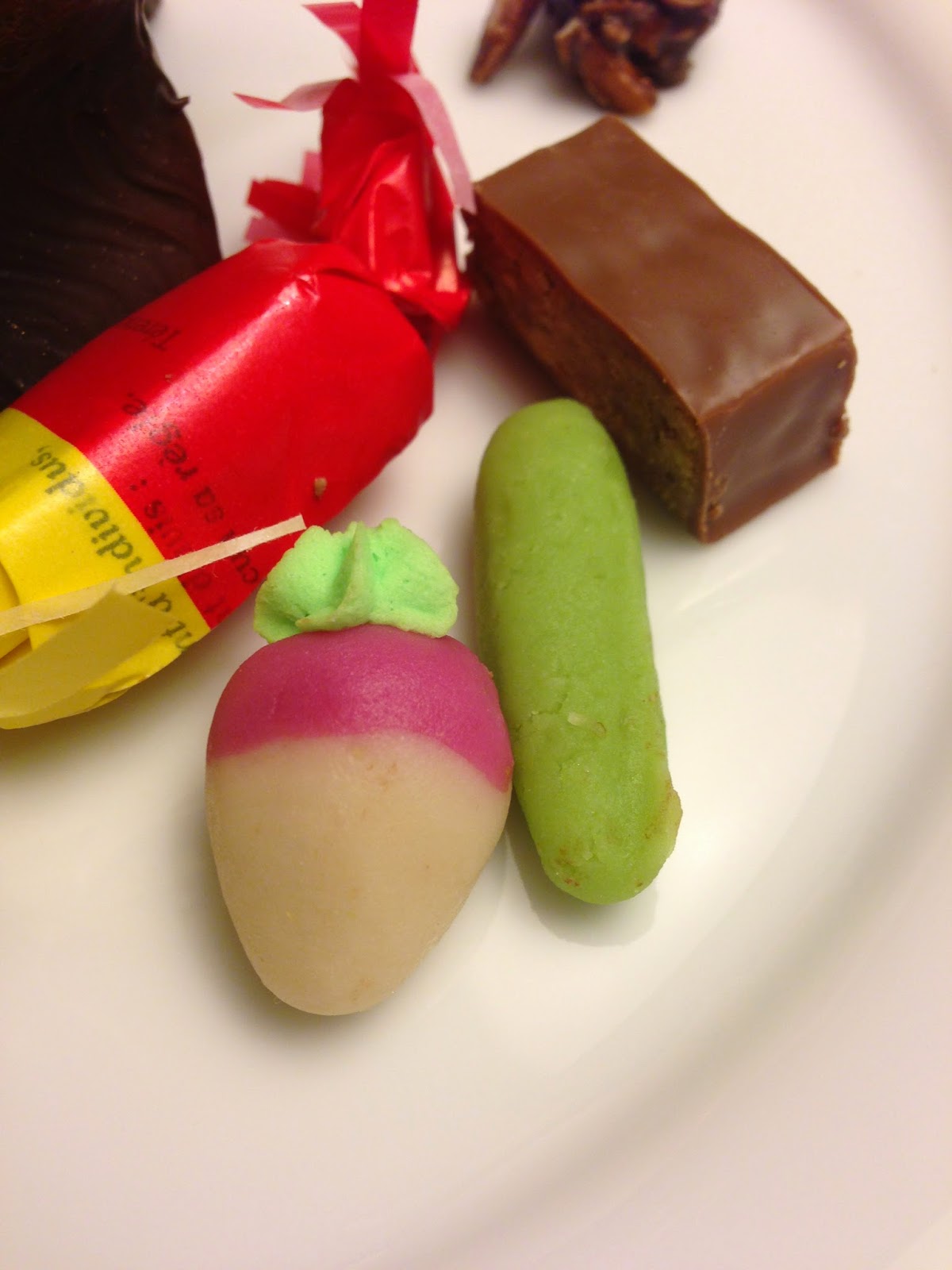 On December 11/12, in addition to public celebrations which include a parade, songs, and even a road run, each family gets to eat their marmite. The youngest member is given the honor of smashing the cauldron while reciting, "Ainsi périssent les ennemis de la République!" which translates as, "Thus perish the enemies of the Republic!"

I was quite taken with the story and it's one I'll remember. I'm loath to smash my little marmite but I know it won't keep forever. I guess I'll have to plan another trip around this time of the year. 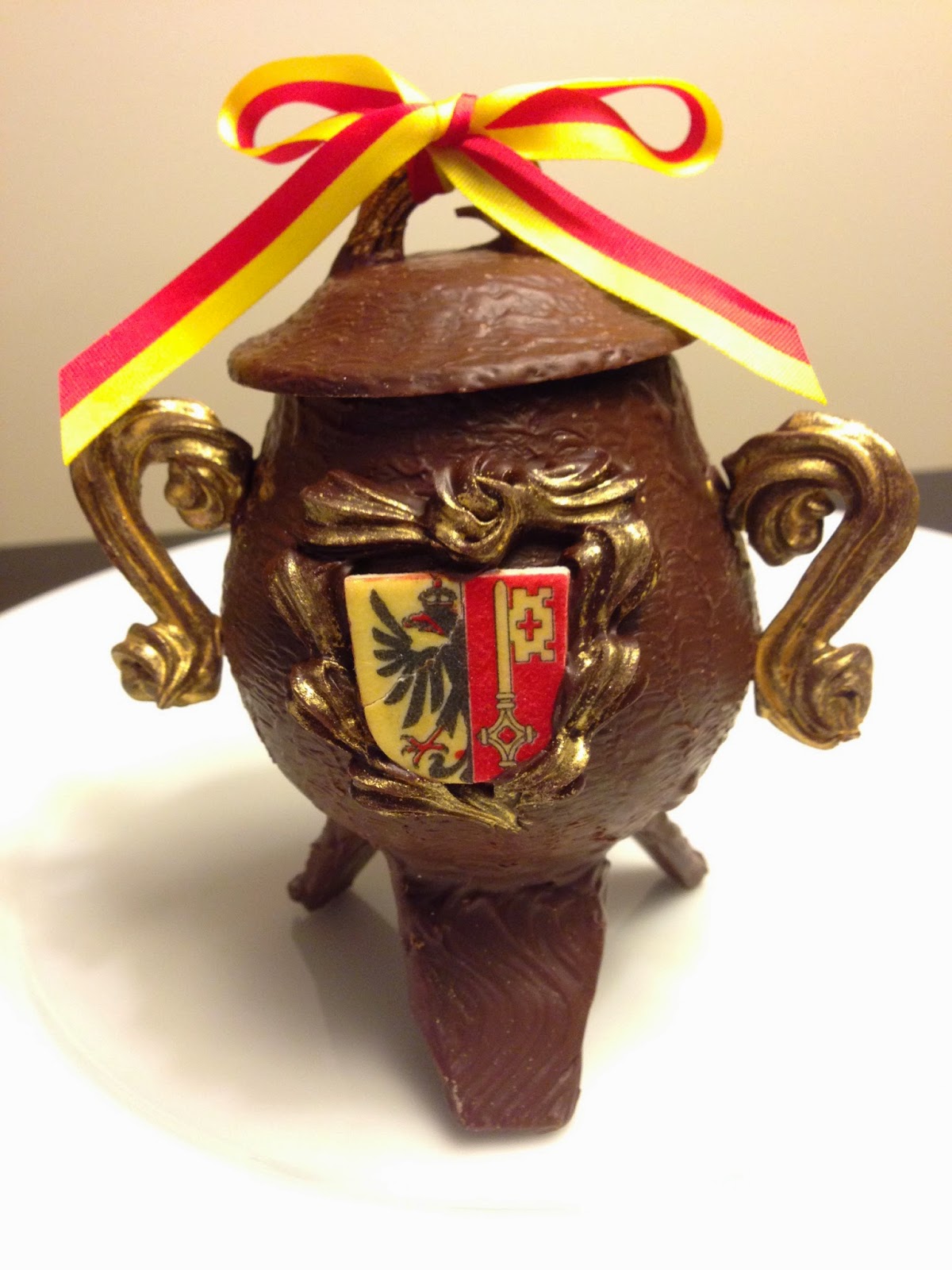 Special thanks goes to my dear friend Michelle who introduced me to Geneva, the story of the marmite, and provided many of the pictures.


*Many of these details on the history came from Wikipedia
Labels: events holiday travel