There's nothing like fresh baked bread and the way the warm, yeasty smell fills the house. My mother would make bread every week and had a bread starter going for years. Unfortunately it's one of the traditions that we didn't continue as a family.

Recently I've seen articles and television shows highlighting recipes for beer bread. This savory version of a quick bread is perfect for me requiring no proofing or rising time and also a means for using up random bottles of beer. It's not like an artisanal loaf or a baguette but it's a nice hearty bread that's easy to make and modify. 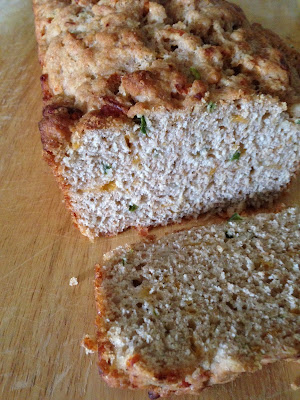 I selected this recipe from Epicurious. Usually when it comes to baking I follow the recipe verbatim but there was something about this recipe that immediately invited modification. I started by using a combination of all-purpose flour and whole wheat flour. I also reduced the amount of butter and added some grated cheese and diced jalapeño.

The flavor of the bread will change based on the beer used. I've used a Dogfish Head Punkin Ale and Singaporean Tiger beer. I will add cheese if I have something in the fridge that I want to use up - I've used Spanish Mahón as well as different types of cheddar.

For this bread I used a Tiger beer and some sharp cheddar. I also decided to add a diced jalapeño (with the ribs but not the seeds). In the future I may add some bacon or maybe some nuts or sunflower seeds. So far the recipe seems pretty forgiving and, as I mentioned earlier, pretty accepting of modifications.

In most cases the bread forms a nice crust - due to the butter brushed over the surface before baking. But right now we're in the midst of a rain storm in Boston and the humidity in the air affected the crust - as it would with any bread. It's still tasty and works very nicely in the toaster.

So if you have a little time, try this recipe. Let me know what you think and any additions or modifications you make. 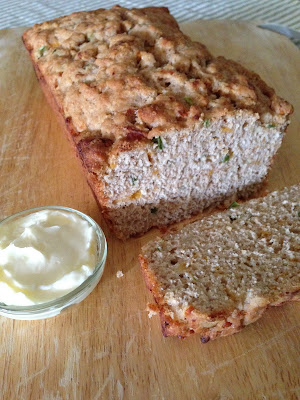 Preheat the oven to 375°F. In a mixing bowl, combine all the dry ingredients, cheese, and jalapeño. Add the honey and then all of the beer, mixing as little as possible; the batter should be lumpy.

Brush the inside of a 9-x-5-x-3-inch loaf pan with some of the melted butter. Pour in the batter and brush the top with the remaining butter. Bake in the oven for 35 to 40 minutes, or until an inserted skewer comes out clean. Turn out onto a rack to cool.