This year has been tough on our Moveable Feast scheduling. The first Feast of the year fell victim to the winter storms and it wasn't until mid-Spring when we finally celebrated the foods of Peru (I owe you a post about this one). Our second Feast welcomed the foods of Summertime the day before the first day of summer.

When I decided on the theme I envisioned light, fresh fare inspired by farmer's markets and minimal time in the kitchen. "Light" wasn't the right word for our Feast but everything was delicious just the same. 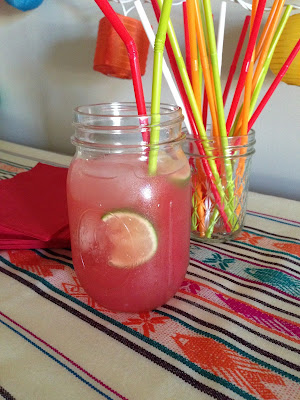 I made four dishes (my prerogative since I was the host) - slow-cooker barbecue brisket, buttermilk biscuits, s'mores bars, and watermelon-lime agua fresca (including a boozy version for the adults). These dishes were fairly easy for me to pull-together and involved a lot of waiting - 12 hours for the brisket, several hours for the agua fresca. The biscuits were the only thing I made at the last minute.

From the beginning I knew I wanted to make a watermelon-lime agua fresca. I had it once at one of Rick Bayless' restaurants and it was so refreshing, perfect for a warm summer day. Unfortunately his web site didn't share the recipe but I found another blog that posted it along with a watermelon cocktail that used the agua fresca as its base.

The agua fresca is easy, containing just three ingredients - watermelon, lime juice, sugar - blitzed together in a blender, strained to remove any seeds, and chilled. For the cocktail, add some tequila and Aperol. Serve the drinks over ice, relax and enjoy! (Just make sure everyone knows which pitcher contains which drink.)

The other recipes included Easy Slow Cooker BBQ Beef Brisket and Our Favorite Buttermilk Biscuit. The brisket recipe involved a dry-rubbed brisket braised in a homemade barbecue sauce in a slow cooker. I had most of the ingredients in my pantry and only needed to buy the brisket and chipotle peppers. Putting everything together took about 10 minutes and then I set the slow cooker to low and went to bed. Easy.

As we move into the second half of the year we'll try to make up for our scheduling difficulties. Our next Feast is planned for the beginning of August so things are looking good (fingers crossed). Happy Summer!