Years ago when a group of friends and I were celebrating Thanksgiving, a friend asked me to make mushy peas. I had no idea what she was asking for so I made something up. I bought a can of peas (which already sounded mushy to me) and cooked it to death. Needless to say this was not what she wanted.

In spite of my time living in the UK, mushy peas was not one of the dishes I came across. It wasn't until a few years later, while watching an episode of Jamie Oliver that I was introduced to this lovely side dish. 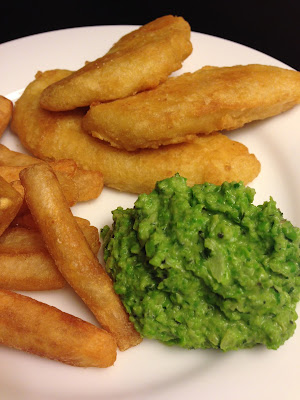 Mushy peas are traditionally served with fish & chips although I never noticed it on the menu when I went to my neighborhood chippy. I rarely, if ever, fry things in my house but I enjoy this as a side dish for many things. Once I discovered this recipe, I couldn't stop eating it. I actually overdid it and stopped making it for awhile.

I love the simplicity of Jamie Oliver's recipes and this one is exactly that - four main ingredients plus a little olive oil, salt, and pepper. 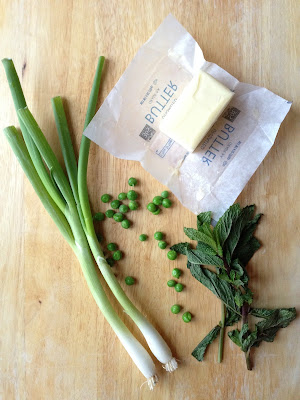 Throw the scallions, mint, and peas into a pan to steam for a bit. Throw everything into a food processor along with some butter, salt, and pepper. Whizz it together to your desired consistency. And done. 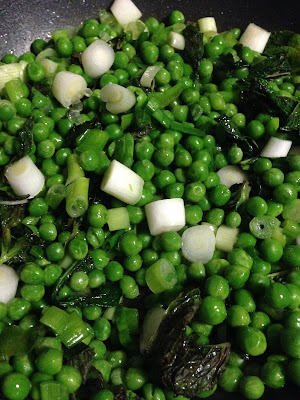 Now I order mushy peas whenever I see it on the menu. But if I ever have a craving, I can whip this up in no time (confession: sometimes this is all I eat for dinner).

Heat the olive oil in a pan and add the scallions, mint, and peas. Cover and leave for a few minutes to steam. Place the mixture in a food processor and pulse until smooth. Add butter and season with salt and pepper, to taste. 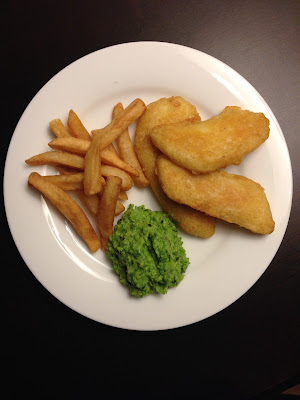 This is dedicated to one of my best friends, Sharon. I would have never discovered this fantastic dish without her :)

Andyblackpool said…
These are not mushy peas, they are peas that are crushed, Jamie Oliver is not at all times to be trusted he's no more than a soppy mincing southerner and he has no idea whatsoever as to what he's talking about with this recipe. We never have onions in mushy pease for a start (quite alien) here in the midlands and north where mushy peas are absolutely ubiquitous, and we don't use garden peas either. Maybe you stayed in the south of the UK for a while? - I visited there a couple of times over the years and if ever I asked for mushy peas in a chippy they looked at me like I had two heads (and if they've have offered them me with chopped onions I'd have looked looked at them in the same manner!!) They don't even have gravy in southern chippies either; honestly some people eh? tut! Inbox me your address (or a post box address if you prefer, though I assure you I am not a mad stalking axeman) and I'll post you a bag of real 'northern' mushy peas. You haven't lived until you tried the real thing and not this sloppy mess that JO is trying to promote under false pretences. Love your blog BTW ;-)
22 November, 2019 05:39

Julie said…
@Andyblackpool - thanks for the comment and sorry for the delayed response. As you read in my post, mushy peas are not a dish I'm familiar with and this is the only recipe I've made. Would love an authentic recipe for northern mushy peas if you have one to share - or do you buy them ready made in the shops? I lived in London for a bit so based on your comment I assume it's not a southern UK staple.
25 December, 2019 21:57

Naomi said…
You can buy frozen mushy peas from food stores such as Tesco, Asda, Morrisons ect. Boil in water until reduced with a bit if butter mint, salt and pepper or just salt and pepper. U can also add a dash of like juice, what ever your preferred taste is. Hope this helps. Frozen mushy peas are 100 percent nicer than tinned.
16 May, 2020 02:38