Unlike most of my family I'm indifferent to mochi. If it's there I'll eat it, if not, I don't miss it. When I come home to Hawaii I don't feel the need to seek out treats from different family-owned mochi shops to take back to the mainland with me.

However, one type of mochi that I enjoy is butter mochi, something that I've only heard of in Hawaii and is another example of something delicious that comes from the blending of cultures. 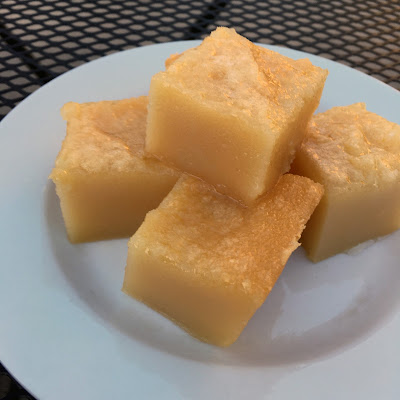 Because it's made with glutinous rice flour butter mochi has a chewiness similar to regular mochi but it's more firm, less sticky, and less pliable. In some ways it reminds me of the dessert we make at Chinese New Year - gao - because it's baked and then cut when served. But butter mochi is much sweeter and richer than its Chinese counterpart.

The recipe is easy and it makes a lot. I personally like it when it's freshly made (after it's cooled, of course) when they edges are crispy. We're going to test out how well butter mochi freezes because there's no way my sister and I will get through a whole pan on our own.

This particular recipe calls for a lot of sugar. I've seen many recipes with the sugar reduced by at least a half cup. We also make it with full-fat coconut milk but I plan to try it with reduced fat coconut milk sometime in the future. I know some recipes remove the coconut milk altogether because of the richness but to me, it needs that coconut flavor to make it butter mochi.

In a large bowl, combine Mochiko, sugar, and baking powder.

Slowly incorporate the wet ingredients into the dry, mixing with a wire whisk, stirring to avoid lumps.

Pour the batter into the prepared pan(s) and bake for 50 to 60 minutes; cool. Cut with a plastic knife to serve. 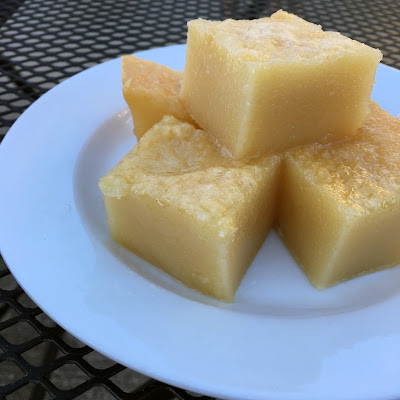