I was first introduced to Marisa McClellan and her blog Food in Jars several years ago. A friend learned of my interest in making jam and sent me Marisa's recipe for blueberry jam from her first book. And from that point I was hooked. Her cookbooks and blog make canning very accessible. I also attended a class she hosted when she came up to Massachusetts a few years ago. 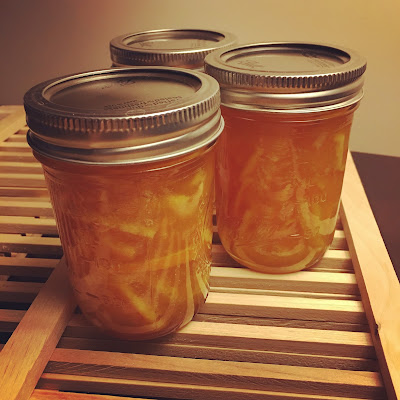 This year, through her blog, Marisa is hosting a Mastery Challenge to inspire her followers to expand their skills and test their comfort levels. In looking through the twelve challenges she's selected for the year I see that these will indeed be tests for me. Thus far I've made different jams but have shied away from some of the more difficult ones. I've also done a little pickling - dilly beans and pickled okra - to varying degrees of success.

Using the small batch marmalade recipe offered for the challenge I tried my hand at this month's challenge. The only difference, and it may be a big one, was I used navel oranges because I couldn't find Seville oranges. 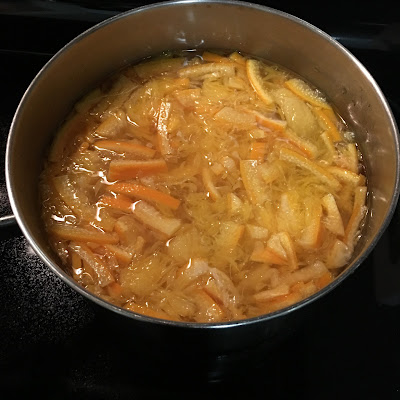 The recipe seemed straight-forward enough. My biggest challenge was getting the marmalade to the right temperature of 220°- 221° F. I decided to use my candy thermometer as opposed to my instant read thermometer that I usually use. More than anything I was curious to see what the differences might be between the two. 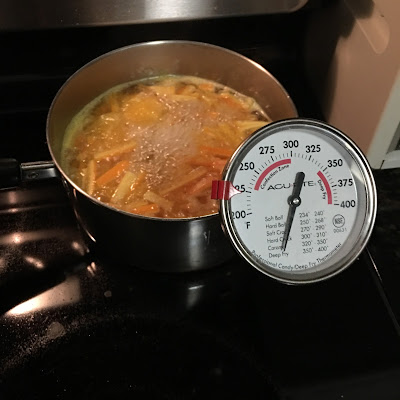 The candy thermometer seemed prone to fluctuations throughout the cooking period. I stirred the marmalade to distribute the heat and see if it would regulate the temperature but I was never confident in its reading. I finally resorted to using my instant read thermometer.

Had I planned better I would have used the plate-in-the-freezer method as a backup. As it was, I didn't want to overcook the marmalade. In the end I may have overcooked the marmalade a bit as the recipe yielded 3.5 instead of 4 half pints.

The other thing I goofed up big time was not checking if I had any lids. I did not. I only had lids that I used previously so rather than having a batch of shelf-stable marmalade, I now have a batch of refrigerator marmalade. Ah well, I'm not too worried. It will be eaten in good time.

The batch I made is not as sweet as the store-bought marmalade I'm used to which is likely due to the oranges I used. I definitely want to try making marmalade again, maybe using a different combination of citrus to see how the results differ.

I wouldn't say I've mastered this skill - who can say that after trying something once - but I'm less intimidated and am looking forward to trying it again. I'd say that's a pretty successful start to the Challenge. We'll see what next month brings.