This month's assignment for the Food in Jars Mastery Challenge was Salt Preserving. I admit that before the assignment came out I was apprehensive. I thought we would be curing meats or something that sounds iffy if not done correctly. Thankfully we are easing into this technique. Since I'd made preserved lemons in the past, I decided to make a citrus/herb salt. 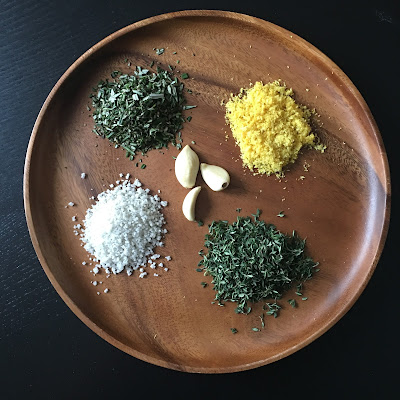 I did some searching on the Internet and finally settled on using this recipe from The Creekside Cook as my guide. The nice thing about making an herb citrus salt is the amounts for each ingredient isn't as exacting as making a preserve. You want to keep the general proportions of salt to flavorings so you don't end up with something overpoweringly salty, but after that, from what I've read, it's fairly flexible.

I chose to use thyme, rosemary, lemon, and garlic to flavor my salt. The recipe called for 2 cups of herbs. It wasn't specific about whether or not the herbs should be chopped first before measuring. Because I used thyme, chopping wasn't required but to yield 1 cup of leaves, it took a fair amount of work. The work isn't difficult but it took me a couple of hours to strip enough leaves from the stems (I just sat in front of the television and caught up on shows I had on the DVR).

The rosemary was much easier to deal with. Since the thyme leaves were so small by comparison, I chopped the rosemary first before measuring.

I used the zest of 2½ lemons (I say half because one lemon was particularly tiny). It yielded about 3 or so tablespoons of zest (again, exact measurements aren't necessary).

And finally I used 3 cloves of garlic which I chopped finely on its own and then chopped with a tablespoon or so of salt to break it down further. I didn't create a paste with the salt as you often see done. I just wanted to get it down to a small enough size that it would distribute evenly.

I mixed the ingredients and spread everything out on a waxed paper lined sheet pan to dry. There's so little humidity in the winter that after the first day everything felt dry enough but I let it sit out for another day just to be sure. 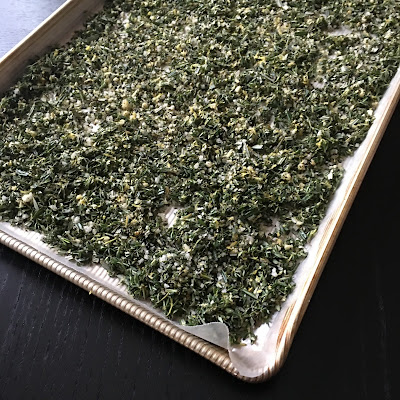 Total yield was about 1½ cups. I gave some away and used some to roast chickens - just adding freshly ground pepper and mixing with olive oil to make a paste. It's delicious! 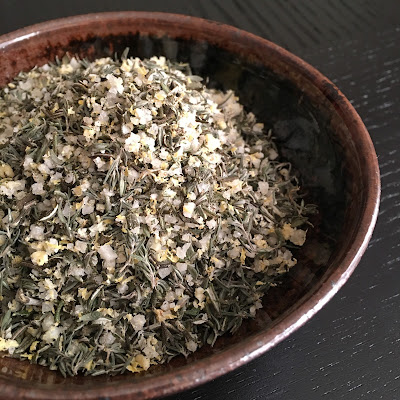 This challenge was much more successful than the first. I really love the results and look forward to using the fruits of my labor.

Modified from The Creekside Cook

On a cutting board pour a tablespoon or so of salt over the chopped garlic. Mince and incorporate the salt and garlic, rocking the knife through the mixture first in one direction and then crosswise. You want the garlic pieces to be about the size of the thyme leaves.

Mix all the ingredients together then spread the mixture out on a waxed or parchment paper lined rimmed sheet pan. Depending on the weather and humidity it will take 2-5 days to dry. Store in an airtight container. It should keep for several months. 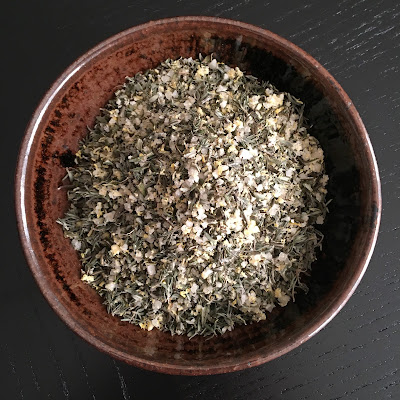 Anonymous said…
Julie, this looks like something I would use! Thank you for posting....I'm in the challenge but have been moving/changing jobs these last two months so have not been able to participate....two summers ago I made basil salt and loved it! This will be a nice addition to start my salt collection.... 😀