Will runDisney for Food

Until a few years ago I never imagined that I could combine several of my favorite things - food, friends, Disney, and running (okay that last one isn't really a favorite) - into one fantastic experience. But as it turns out, runDisney makes it possible. I participated in two race events so far and with about 40 days until my next race I should be training. Instead, if your interests are like mine, I'm encouraging you to find an event and sign up! 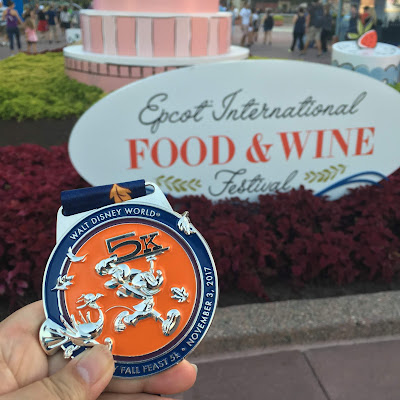 The Race is Just the Beginning...

If you don't think a runDisney race is for you keep in mind that one requirement is that participants maintain a 16-minute mile. This means the races are totally doable even if you're a walker and not a runner. During my first race I met a woman who walked a 5K, a 10K, and a half marathon.

Need more reasons to participate? How about special characters along the race route like Elvis Stitch?


With Disney photographers stationed along the route you will also get photos of yourself throughout the race including that all-important finish line photo. It's easy to connect to PhotoPass so everything is available in MyDisneyExperience.


And of course there are the medals, shirts, and other swag. 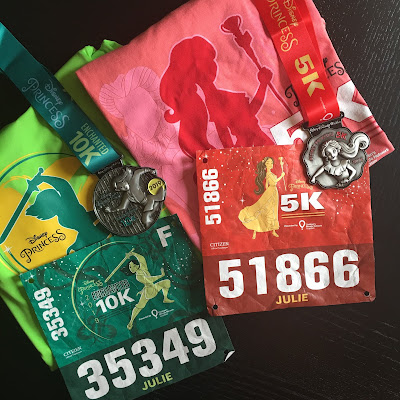 Post-race, as you walk around the parks wearing your medal, it's almost as if you won a world championship yourself. It's amazing to receive congratulations from cast members and guests alike. 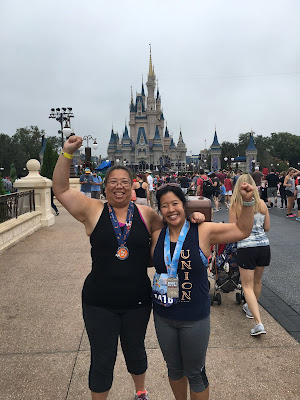 
I'm Here for the Food Too

Part of the fun of going to Disney World is planning where to eat. There is more to the food than just hamburgers and mac & cheese. This is something I have only recently fully appreciated. Whether you are in one of the resort hotels, visiting Disney Springs, or in the parks there is delicious food to be had.

For example, we often stay at the Port Orleans - French Quarter resort and one of the first things we get are the Mickey beignets. They won't qualify as a great pre-race nutrition option but they are oh so good.


There are far too many options at Disney Springs, but a couple of our favorites are Art Smith's Homecomin' (did someone say fried chicken and doughnuts?) and Morimoto Asia (get the ribs!). It's the perfect place to go on your day of arrival when you aren't quite ready to head into the parks.


And finally, in the parks themselves we've been working our way through the table service restaurants. They often, but not always, offer an oasis from the crowds. One thing we enjoy doing is making late reservations just before park close. The restaurants tend to be quieter and less crowded and the bonus is walking through the park when it's closed. You won't be allowed to wander and explore but it's a cool experience to have a near empty park.

But I Can't Make it to a runDisney Race

The runDisney races in Disney World are held when the weather is favorable for running and does not overlap with peak (a.k.a. crowded) times like school vacations. Unfortunately this means that some folks, like my sister, won't be able to make it to a race but they still have an option to participate and be part of the fun.

In the summer runDisney offers the Virtual Series of 5Ks. Each summer month, based on the honor system,  you walk/run a 5K on the day of your choice at a location of your choice. For each 5K completed you receive a medal. Complete all three and you get a series medal. In addition to the medals you can also print bibs and finisher certificates. Each series is themed - 2018 celebrated the release of the Incredibles 2 film and 2019 celebrated 80 years of Marvel Comics.

Are you excited yet? Participating in a runDisney event is more pricey than your average race but is a great way to combine your love of Disney, food, and even running into a fantastic experience.