Earlier this year Pixar released the recipe on Instagram in a series of adorable illustrations. The recipe is consolidated below but you can view the full set of illustrations on the Disney Food Blog.
This recipe is based on the cookies served at Pixar Pier in Disney's California Adventure park. The originals are made with chocolate chunks instead of chocolate chips and are served as large, deep dish cookies. I played around with making standard 2½" cookies and larger ¼-cup sized cookies. We liked both versions equally. 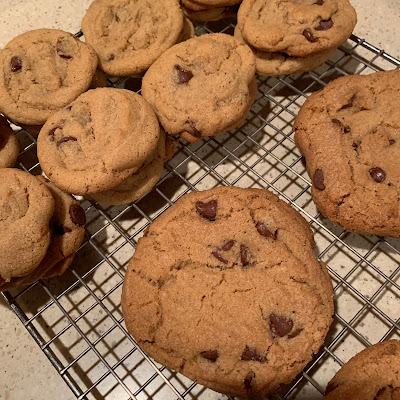 modified slightly from the Pixar recipe

Brown butter* and let it cool until it begins to solidify.

Cream butter and sugars in a mixing bowl until light and fluffy.

In a separate bowl, combine the flour, baking soda, and sea salt. Slowly mix the dry ingredients into the wet. Using a wooden spoon or spatula, fold in the chocolate chips until evenly distributed.

Bake at 350° for 18-20 minutes for large cookies, 7-10 minutes for small cookies. Cookies should be a nice golden brown on the edges but still soft in the center.


*To make brown butter (from delish.com):