To wrap up this month of soups I am sharing a local Hawaii favorite, Portuguese Bean Soup.

Hawaii is a melting pot of cultures and cuisines as a result of families immigrating to the islands to work on the plantations. In addition to several Asian groups like Japanese and Chinese, Portuguese also came to Hawaii. They brought with them many foods that have become local staples - pão doce (sweet bread), malasadas (doughnuts), and linguica (simply called Portuguese sausage in Hawaii). Portuguese Bean Soup is one of the dishes that has become a local mainstay. 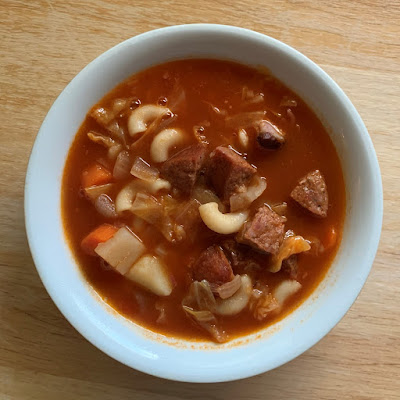 This soup can be found on the menu at many local restaurants. I have friends who return to the islands and the first thing they want is a bowl of Portuguese Bean Soup from Zippy's. It is also a mainstay of the annual Punahou Carnival where many people buy large containers to take home. This recipe is from Punahou and was shared in the Star-Bulletin in 1999.
The base of this hearty and filling soup is a stock made from ham hocks, enhanced with tomatoes. The spice and flavor come from Portuguese sausage and lots of vegetables complete the dish. Like many dishes in the islands, it is often served with rice but it is also a complete meal on its own.
This recipe is not difficult, it just takes time. Two hours to make the stock. Another hour for the meat, vegetables, and macaroni to cook. And a final 25 minutes to cook the cabbage.  The end result is a large, and I mean a LARGE, pot of soup. The recipe states that it makes 10 large portions. I think it's more like 12+ large portions.

This is a rustic soup so don't fuss too much when chopping the vegetables. You don't want them to be finely diced but you do want them to be about the same size so they cook evenly. When you first read through the recipe you may find it strange that the macaroni is cooked for such a long time. The macaroni shouldn't be al dente but neither will it be mush. Just remember that when you add the vegetables and macaroni, you start timing immediately, you don't wait until the soup comes to the boil first.

This is a great soup to feed a crowd or to make on the weekend for the coming week. Enjoy this taste of Portugal by way of Hawaii! 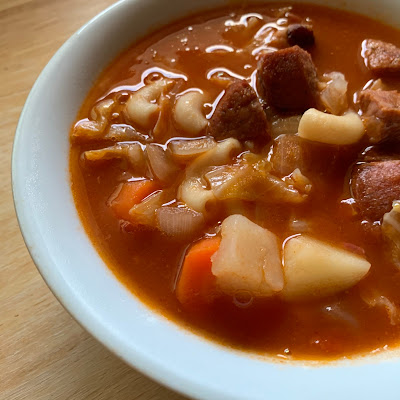 This is a popular soup in Hawaii. This recipe comes from Punahou School and is modified slightly from the version shared in the Star-Bulletin on February 10, 1999.
Prep time: 20 MinCook time: 3 H & 30 MTotal time: 3 H & 50 M