In bakeries in Hawaii you will often find Dobash cake in the display case. This Hawaii-born cake layers chocolate chiffon with a pudding-like frosting. It is a favorite in the islands, but many, including my co-worker, will be quick to tell you that despite its apperance a dobash cake is not chocolate cake. 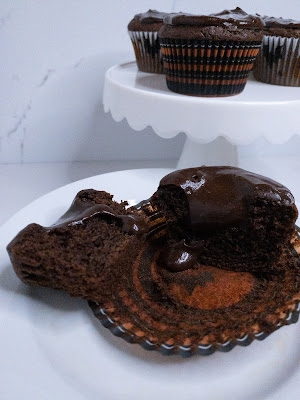 What is a dobash cake?

It's hard to find an exact historical reference for the origins of Hawaii's dobash cake. There is the similarly named and pronounced dobos torte from Hungary which seems to be a far distant ancestor. It is vanilla sponge cake layered with chocolate buttercream and topped with caramel. And based on the dobos torte, a baker in New Orleans created the doberge cake - a cake with multiple thin layers of yellow cake and chocolate custard.

From what I read on the interwebs, the Hawaii dobash cake as we know it is credited to Robert Taira, the founder of King's Bakery (more commonly known now as King's Hawaiian). The Hawaii cake is lighter in texture than its Hungarian and New Orleans cousins and instead of a vanilla or yellow sponge, it is made of chocolate chiffon. Rather than eight or eleven thin layers of cake, the Hawaii dobash cake usually has only two layers. Finally, more similarly to the New Orleans doberge cake, the dobash foregoes buttercream and has a chocolate, pudding-like filling and frosting.

It is the flavor and texture of the cake itself that distinguishes the dobash from a standard chocolate cake. It trades richness for a lighter, more delicate crumb, gaining its decadence from the custardy frosting.

For home bakers, while this cake could be made as a layer cake it is more often made as a single layer 9" x 13" cake. It is still just as popular if not quite as elegant, and makes a great addition to a potluck. The light texture of the cake lends itself to incorporating some grocery store shortcuts, namely boxed devil's food cake mix and instant chocolate pudding. 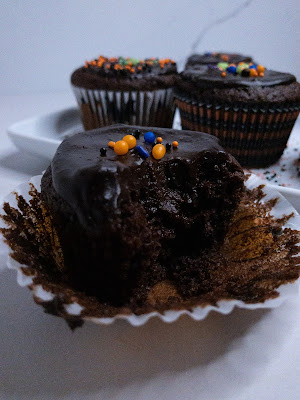 Whereas the cake has some shortcuts, the frosting is made entirely from scratch but nothing too complicated - cocoa powder, sugar, water, and a bit of butter and salt. It's easy to pull together while the cupcakes bake.

Converting the recipe from a 9" x 13" cake to individual cupcakes wasn't difficult. Maintaining the right balance of cake to frosting was the challenge. Unlike a buttercream that can be piped into lofty peaks, the dobash frosting is more like a ganache - too much frosting and the weight will cause it to drip down the sides.

The solution was to create a little pocket of frosting inside the cupcake. Who doesn't love the surprise of a filled cupcake? I used the wider end of a piping tip but you could also use an apple corer or a paring knife. The trick is to not go too deep and to keep the sides in tact so the filling doesn't ooze out.

The flatter surface of the frosted cupcake also provides a little canvas to showcase your creative side. 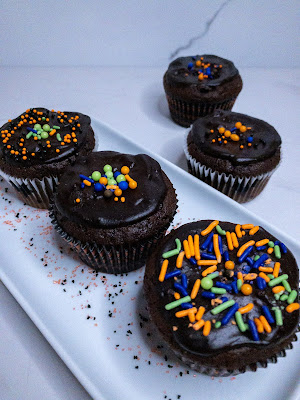 These chocolate cupcakes are topped and filled with a glossy, pudding-like chocolate frosting. They are based on a favorite cake found at many bakeries in Hawaii. The recipe takes advantage of boxed cake mix and pudding mix and is adapted from The Electric Kitchen on Hawaiian Electric's website.
Prep time: 20 MinCook time: 19 MinTotal time: 39 Min

For the cupcakes:
For the dobash frosting:

For the cupcakes:
For the dobash frosting:
Assembling cupcakes: 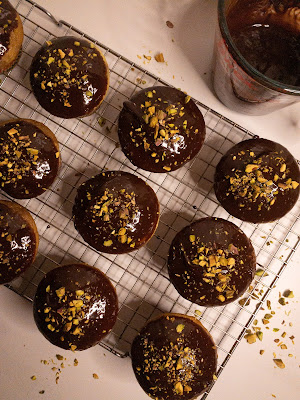